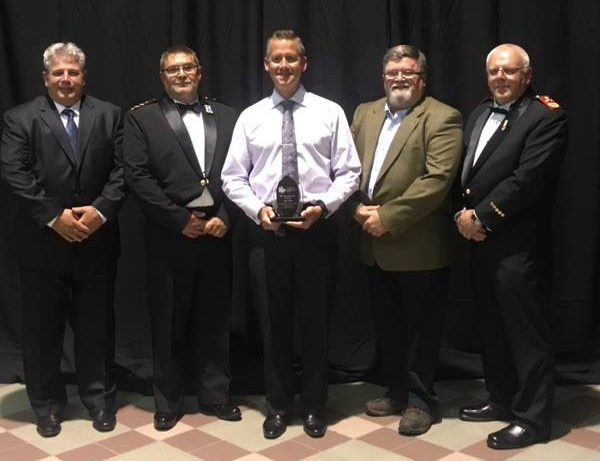 Montreal, June 16th , 2017– An EMS Stroke Ambulance (SA) program established by Alberta Health Services (AHS) in partnership with the University Hospital Foundation in Edmonton, Alberta, Canada, has received the Paramedics Chiefs of Canada (PCC) Innovative Treatment/Technology award. Demers Ambulance, a North American leader in ambulance manufacturing, developed the SA in partnership with AHS that serves as the foundation of the AHS program.

The award was presented to Mike Plato, Associate Executive Director of Emergency Medical Services at Alberta Health Services, at the PCC Leadership Summit held in Halifax, Nova Scotia, from June 7 -9, 2017. The PCC Awards of Excellence are awarded to any person or team who has developed and implemented an EMS process, method or program that demonstrates extraordinary achievement within the last three years. The recipients of the awards are peer-selected and are nominated by care providers and leaders of Paramedicine in Canada.

Alberta Health Services’ stroke ambulance was unveiled in December 2016 and became operational in February 2016. Not only was it Canada’s first mobile stroke ambulance, but it was also the first program in the world to administer intravenous thrombolytics to patients in rural communities. The mobile stroke ambulance’s goal is to shorten the time between stroke onset symptoms and treatment delivery by bringing advanced diagnostics and treatment to the patient. The Stroke Ambulance was funded by donors to the University Hospital Foundation’s Brain Centre Campaign, as a $3.3 million three year pilot project.

“We are excited to be part of this unique and innovative initiative, and although the program is still very new there have already been patients with very positive outcomes, and have been discharged from hospital after experiencing a stroke,” said Mike Plato, Associate Executive Director of Emergency Medical Services, AHS.

“Our mission at Demers Ambulances is to build innovative ambulances to help paramedics throughout the world save lives, and that’s exactly what we were able to accomplish with the Mobile Stroke Ambulance” said Alain Brunelle, Demers Ambulances President and General Manager. “We were privileged to work closely with the Alberta Health Services team on the development of their stroke ambulance and we congratulate them on their award from the PCC. The Alberta Health Services team deserves to be recognized for excellence of the EMS Stroke Ambulance and the program that they developed around it.”

The stroke ambulance Demers Ambulances developed for Alberta Health Services is equipped with a CT scanner and lab equipment as well as video and audio capabilities for the multi-disciplinary team on board to seamlessly interact with neurologists in the hospital while they are providing care en route to the hospital. Instead of utilizing a standard ambulance design and simply inserting a CT scanner with safety nets, the stroke ambulance is completely designed around the CT scanner and stroke treatment with features such as reinforced sub-flooring for the scanner rails, a unique locking mechanism to safely keep the scanner in place, an automatic vehicle levelling system, a lead lined module wall to protect the crew from radiation, and much more. To learn more about the engineering process behind the Mobile Stroke Unit, visit Demers Ambulances Youtube page (https://www.youtube.com/channel/UCYFicCevbfZKVEQ4wquvTlw).

Founded in 1960, Demers Ambulances is the second largest ambulance manufacturer in North America, delivering more than 19,000 ambulances to more than 20 countries. Recognized as a leader in innovative products that meet and exceed the expectations of medical emergency specialists around the world, Demers Ambulances is accredited by Transport Canada, recognized as a “Qualified Vehicles Modification” (QVM) by Ford, and also holds the US National Truck Equipment Association (NTEA) Member Verification Program (MVP) certification. To learn more about Demers Ambulances, visit www.demers-ambulances.com.