For the first time in history, a purpose-built all-electric ambulance designed by paramedics for paramedics.

During every development stage of the Demers eFX Ambulance, experienced paramedics operating in various environments and conditions were invited to share insights, test prototypes, validate assumptions and provide valuable feedback.

Not a single mechanical, medical, design, or ergonomic aspect was left untouched, and the result is simply astonishing.

Demers eFX is centered around the human, with the unique characteristic to meet the fundamental needs of paramedics, patients, and fleet managers – without compromise.

No innovation embodies the unique Demers values of customer centricity, inspiring leadership, showing integrity, embodying the family spirit, and the pursuit of excellence – the way the Demers eFX Ambulance does.

These values not only serve as the foundation for the vision of the Demers eFX ambulance, but also guide every single innovation-decision from conception to commercialization, and beyond.

Why an all-electric ambulance?

When performing medical maneuvers or handling important equipment, paramedics are often standing or moving while the vehicle is in motion, taking significant risks with their own lives.

Every year, accidents involving paramedics end careers, take lives, and leave EMS technicians with long term injuries. With the collaboration of Lion Electric in the development of its all-electric chassis, the Demers eFX Ambulance has enhanced ergonomics, by paramedics – for paramedics, providing a much safer environment, and allowing most medical maneuvers and equipment to be reached while being seated with a seatbelt fastened.

It is a game changer.

The Demers eFX 184 model is 20% roomier than that of traditional ambulances.

Being 100% electric, equipped with an adaptive suspension and its stretcher position relocated between the axles, the Demers eFX Ambulance offers a much quieter environment, smoother ride with far less vibrations and noise, than traditional ambulances.

On average, an ambulance operates on idle more than 50% of the time. Demers eFX Ambulance allows all electrical accessories (heating, a/c, computer) to run on battery power only, without the need to use the engine, all in a zero-emission environment.

The Demers eFX Ambulance is equipped with regenerating braking systems, which enables the engine compression to serve as a natural braking mechanism, thereby reducing the reliance on brake pads. In turn, it reduces the emission of microparticles emanating from brake pad erosion.

Where electricity generation is carbon neutral.

On average, the Demers eFX Ambulance is 80-90% less expensive to operate per KM/mile than traditional Type III ambulances.

Paramedics in the medical compartment are expected to sit with their seatbelts fastened 5-10 times more often than when working in a traditional ambulance. As a result, insurance premiums, claims and sick/injury absence costs are expected to decrease significantly.

… and many more innovative features to be unveiled shortly! Sign up below to be one of the first to know.

Although the acquisition of a Demers eFX Ambulance may represent a larger initial investment than a traditional ambulance, its twice as long lifespan and its significantly lower energy and maintenance cost make it a no-brainer.

Contact your Demers representatives to discuss how you can maximize the electric advantage for your organization. 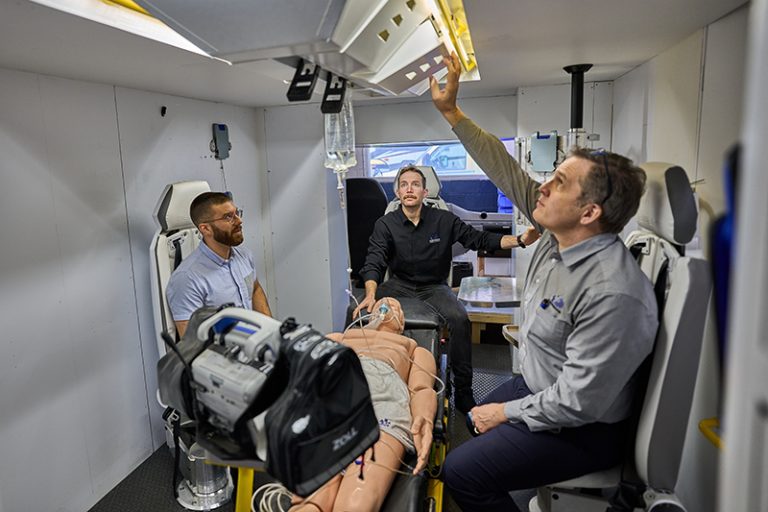 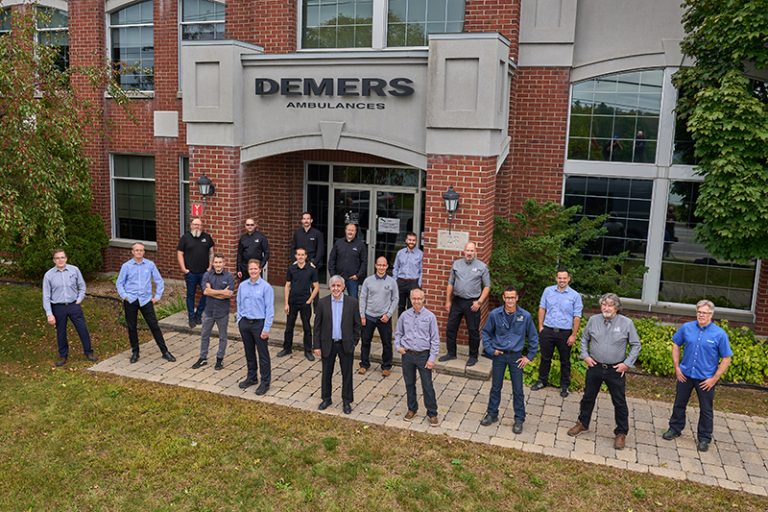 About the Demers R&D team

Over the past six decades, Demers Ambulances has never stopped innovating, releasing ten successive generations of ambulances, each one more technologically advanced than the last, improving the experience of paramedics and their patients each time.

The eFX Ambulance is built on a Lion5, purpose-built to be electric. Over the last decade, Lion has established itself as a leader in the zero-emission heavy-duty vehicle industry, having delivered over 400 all-electric heavy-duty vehicles in North America with over 8 million miles (13 million km) driven since 2016.

In close collaboration with Lion Electric’s engineering team and dozens of paramedics, they have worked to imagine and design the ambulance of the future, free of the layout constraints imposed by traditional ambulance chassis.

Demers eFX Ambulance is the result of the genius and innovation of their combined knowledge and expertise. That’s how the Demers eFX Ambulance is said to have been designed with intention: to improve the safety of ambulance technicians, the comfort of patients, and the future of our planet – at a lower cost.

In addition to be a trusted partner, Lion Electric is an innovative manufacturer of zero- emission vehicles. They produce the chassis that are used to build the Demers eFX ambulances. The chassis that Lion provides are specifically designed to produce an ambulance, a first in the ambulance industry.

Lion is also a leader in transportation electrification in North America, believing that decarbonizing transportation can help improve our society, our environment, and most importantly, our quality of life. Learn more about Lion Electric here. 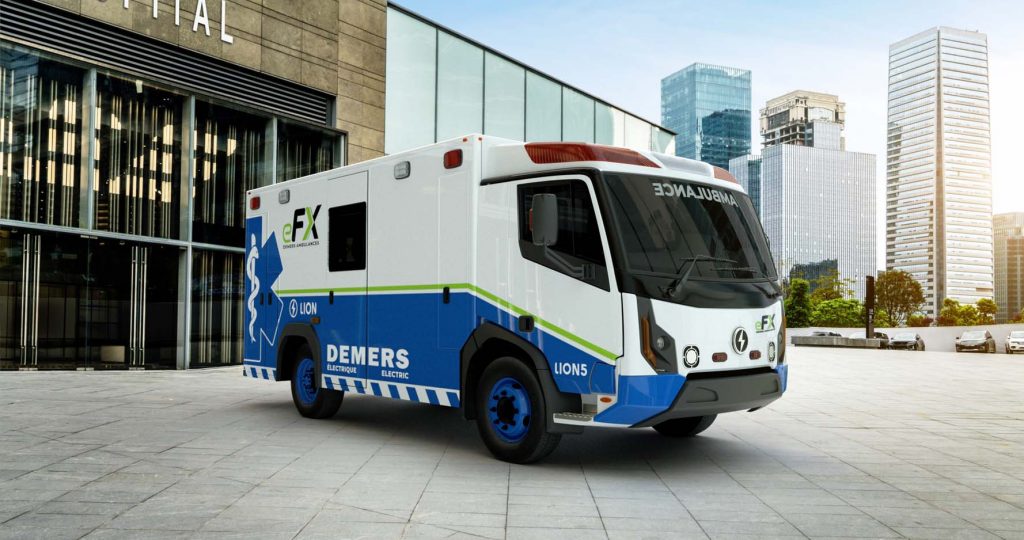 This new model of ambulances, scheduled to be commercialized in the second half of 2022, was developed with the support of the government of Quebec and the National Research Council of Canada Industrial Research Assistance Program (NRC IRAP). It is the result of nearly five years of collaborative work carried out by Demers Ambulances and Lion, which also involved direct input from many paramedic technicians and emergency medical service companies. The Demers eFX Ambulance is the first ambulance designed according to the needs expressed by paramedics.

The Lion5 chassis of the Demers eFX Ambulance will be assembled in Saint-Jérôme by Lion, while the medical compartment and final assembly will be carried out by Demers Ambulances in Beloeil. The new 100% electric ambulance will be sold throughout North America, and eventually worldwide, as ambulances sold by Demers and its affiliated brands are already in service in 43 countries. This exclusive mutual agreement between Lion and Demers contemplates the deployment of at least 1,500 100% electric ambulances over the next five years by Demers Ambulances.

A Major Evolution, Beyond the Zero-emission Vision

In addition to being a pioneer in the energy transition of ambulance transport, the purpose-built electric ambulance will also make it possible to achieve significant gains in the ergonomics, safety and efficiency of paramedics, in addition to improving their overall comfort and that of their patients.

In an industry first, the ambulance will be equipped with a custom-designed chassis for use as an ambulance. The research and development teams of Demers Ambulances and Lion have completely redesigned the living space of the two sections of the vehicle and rethought the ergonomics and layout of the ambulance as we know it.

Some of the main challenges that paramedic technicians frequently face are the ability to maneuver freely while the ambulance is in motion to provide care to the patient while sitting with a seatbelt fastened. The Demers Ambulances’ research and development team, supported by numerous paramedics consulted throughout this process, has developed many innovative features which will be unveiled prior to certification and start of vehicle production.

“This is a great day for Demers Ambulances! Together with our employees, colleagues, partners, and elected officials who support this project that has become a reality, we unveil our 100% electric ambulance, marking the most important evolution of ambulance transport since the first generation of Demers ambulances 60 years ago. Combining innovation and performance, the 100% electric ambulance is the result of an exceptional collaboration with paramedics and we are particularly proud to see this new vehicle generate so much enthusiasm and excitement from the community! I would like to salute the leadership and genius of the Lion team and thank the Government of Quebec and NRC IRAP for their support from day one of this ambitious project.”

“It’s been 5 years since the Lion and Demers Ambulances teams joined forces to develop the 100% electric ambulance that we are unveiling today. Thanks to the Lion5 chassis and Demers’ expertise, this ambulance provides features never seen before. It is with great pride that Lion has participated in this transformative project for society. And this is only the beginning, as the Lion5 chassis developed by Lion could be used in many other applications.”

“With this project, Demers Ambulances and Lion are demonstrating innovation and entrepreneurial boldness. This project not only creates good jobs and long-term prosperity, but also positions Canada as a leader in electric transportation. The electrification of transportation is a major lever for achieving both our economic and climate goals.  That’s why we are proud to support and accompany these innovative companies in this important stage of their growth.”

“The realization of this 100% electric ambulance highlights Quebec’s expertise in the design of electric vehicles and its leadership in the electrification of transportation. This fine example of industrial collaboration between two Quebec companies, Demers Ambulances and Lion Electric, will certainly be a success on a North American and even international scale.”

“Healthcare workers are so precious to us, we must do everything possible to take care of them. In the era of the electrification of transportation, the arrival of the all-electric ambulance will limit the problems of ergonomics and the risks of accidents in the vehicle on the move. It is therefore an important advancement that combines safety and innovation for patients and healthcare workers.”

“Today’s announcement is another step to reduce GHG emissions in the transportation sector. To achieve carbon neutrality in 2050, it is necessary to electrify everything that can be electrified and an electric ambulance is a concrete example. Supported in part by the Electrification and Climate Change Fund (ECEF), this is a further step forward in the implementation of the 2030 Green Economy Plan.”

– Benoit Charette, Minister of the Environment, and the Fight against Climate Change

Lion Electric is an innovative manufacturer of zero-emission vehicles. The company creates, designs and manufactures all-electric class 5 to class 8 commercial urban trucks and all-electric buses and minibuses for the school, paratransit and mass transit segments. Lion is a North American leader in electric transportation and designs, builds and assembles many of its vehicles’ components, including chassis, battery packs, truck cabins and bus bodies.

Always actively seeking new and reliable technologies, Lion vehicles have unique features that are specifically adapted to its users and their everyday needs. Lion believes that transitioning to all-electric vehicles will lead to major improvements in our society, environment and overall quality of life. Lion shares are traded on the New York Stock Exchange and the Toronto Stock Exchange under the symbol LEV.

About the Government of Quebec’s financial support

MOBEL, a specialty electric heavy-duty vehicle mobilization project in which Demers and Lion are participating, receives financial assistance from the Government of Quebec and meets the objectives of the Plan for a Green Economy 2030.

About the NRC IRAP financial support

The research and development of the Demers eFX ambulance project benefits from advisory services and funding from the National Research Council of Canada Industrial Research Assistance Program (NRC IRAP).

Media representatives wishing to conduct interviews with leaders or elected officials are invited to contact:

Sign up to be the first to know all about the exciting new features of the next all-electric ambulance and receive the Demers eFX newsletter – which is packed with information on innovations, government grants, and the latest developments in the ever-expanding network of charging stations.

MOBEL, The project Mobilizing development of specialized heavy electric vehicles (MOBEL) of which Demers and Lion are part of receives financial assistance from the government of Québec and meets the objectives of the 2030 Plan for a Green Economy.